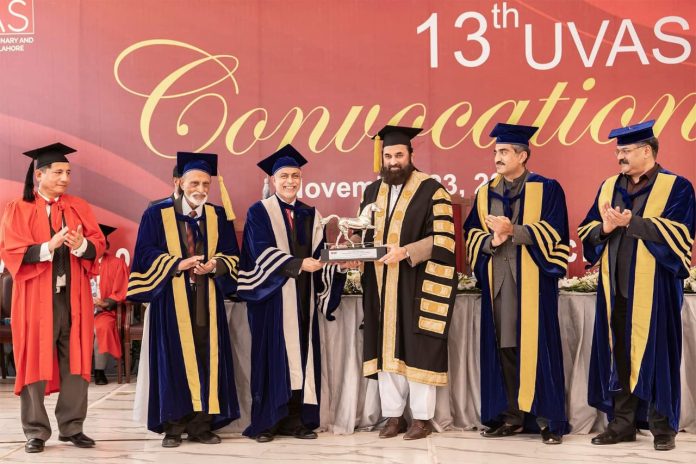 He said university through its flood relief activities set a good example of community service for other educational institutions that how to act during such national emergencies.
He said that Livestock sector has the potential and can play a key role in ensuring food security and poverty alleviation. He hoped that UVAS scientists will also play their lead role in research and capacity building to cope with the challenge of food insecurity. He said the government is taking revolutionary steps for the uplift of the livestock sector and focusing on provision of safe and healthy livestock products to consumer. He said government is also focusing on youth entrepreneurship and has launched various initiatives and providing many opportunities for starting their own business. He said foreign students those who successfully completed their degrees, play the role like as an ambassador of Pakistan and attract more students from their respective countries for getting education in Pakistani institutions.
Earlier, the Chancellor along with the UVAS Vice-Chancellor gave away degrees to PhD scholars and medals to the position-winning graduates.
Presenting the welcome address, Vice-Chancellor Prof Nasim Ahmad spoke about the academics, research, development, extension programmes, various initiatives and community services of the university. He said that with a history of 140 years of excellence, UVAS has been ranked among 401-500 universities in the world according to Times Higher Education Emerging Economies Ranking 2022 and ranked among 551-600 by the QS Asia University Ranking 2022. UVAS got 4th position among public sector universities of Pakistan in the Higher Education Commission National Sports Ranking.
He said we encourage our students by providing them incentives including merit and need based scholarships. UVAS awarded 1,370 scholarships during the fiscal year and total amount awarded in these scholarships was over Rs.101.28 million, he added.
Prof Nasim said that UVAS is a research intensive university and is currently executing 90 research projects worth over Rs 1,140 million, of which 13 projects are foreign funded of worth Rs 356 million.
He said that UVAS is executing ongoing development projects worth Rs.10. billion funded by the HEC and the Punjab government. He said current year, the university has secured two new development projects of Rs 3065.5 million. He mentioned projects are strengthening of KBCMA CVAS, Narowal (Rs 2,880 million) sponsored by HEC and strengthening of academic and allied facilities at College of Veterinary and Animal Sciences Jhang (Rs 185.500 million) funded by L&DD Department, Punjab.
Prof Nasim said that due to floods devastation in 2022, the university rose to the occasion and contributed its services to relief efforts, mitigating the sufferings of humanity and livestock. Following the enormous damages in recent floods UVAS organized donor conferences and collected donations worth 25 millions of rupees in cash and kind for flood affected people and livestock, he said. UVAS sent several volunteer teams to flood hit areas in all the four provinces to provide veterinary services, basic medicines, vaccines and feed to the stranded livestock apart from the provision of items of basic needs and ration to affected people.
Prof Nasim said UVAS is facing financial problems as the government has drastically reduced university funding, causing budgeting issues to the campuses and second problem is the ban on recruitments, which is causing human resource deficiency on the campus. He requested to the Chancellor to intervene to address these issues.