The fallacy of unity government is paralyzing Lebanon 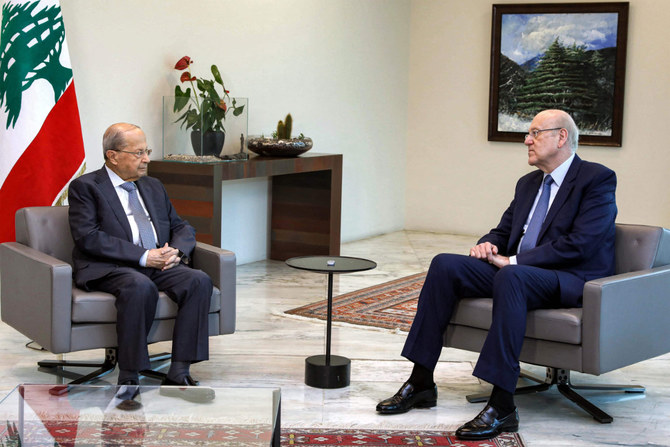 Lebanon’s parliament speaker is calling for a unity government that will rescue the country from its calamities. However, the reasons for these calamities and for Lebanon’s failure to have proper governance are mutilated concepts like unity government, “mithakia,” which means proper representation among all sects, and “consensual democracy,” which means all the different parties should be included in policymaking.
Lebanon has always had unity governments and none have been able to put forward any real program for the country. The concept of unity government came about after the death of former Prime Minister Rafik Hariri and was enforced after the Doha Agreement. During the time of Hariri, which extended from 1992, shortly after the end of the civil war, until 2005, the government was one of technocrats.
When Hariri took power after the Taif Agreement, the two main Christian parties were put out of power. Michel Aoun was in exile and Samir Geagea was in prison. Other politicians who kept their places under Taif, like Nabih Berri, the speaker of the parliament, and Walid Jumblatt, benefited from inflated government contracts in return for their acquiescence.
Many say the Hariri years institutionalized corruption. However, during the Hariri years, there was a business plan driving the country. After his death in 2005 came the concept of unity government. This was enforced after the 2008 Doha Agreement, which gave Hezbollah and Amal a third of the Cabinet and the power to veto government decisions.
Lebanon also has the mutilated concept of mithakia, or the fallacy of representation among the sects, which was reinforced after the Doha Agreement, i.e., each one that is strongest in his denomination should be assigned a position for that denomination. So, the Sunni party that gets most of the Sunni seats in parliament should have the premiership, the Shiite party that has most of the Shiite seats should have the speaker’s position, and similarly for the Christians and the presidential role.
The political class has no plan for the country, just a power-sharing scheme that ultimately shares the spoils of the state and through which each party uses some government facility or department as its fief, from which to extract as much money as possible. Former foreign minister and the president’s son-in-law, Gebran Bassil, who is a main pillar of corruption in the country, spelled it out on the sidelines of the 2019 World Economic Forum at Davos. He said that Lebanon could teach London and Washington how to manage a country without a budget.
Thus, the country was turned into a “farm,” as one of my Gulf colleagues described it. Although he added that even a farm has more order than Lebanon. There is no order to anything, just a corrupt class of elites agreeing among themselves to pillage the country. They fight over the ministerial quotas for each party and compete over the most lucrative ministries, like the Ministry of Energy and Water, where all the fatty fuel contracts go. No one can be held accountable as they are all part of the government. This was the motivation for the memorable slogan of the protest groups, “killun yaani killun” (all means all).

The political class has been very clever in benefiting the most from power while holding no responsibility for what has happened.

The political class has been very clever in benefiting the most from power while holding no responsibility for what has happened. This is mostly represented by Bassil’s famous line, “ma khalouna,” meaning “they did not let us,” blaming the failure on others.
A unity government is not really a democratic practice. Democracy means the minority follows the majority, which rules while the minority is in opposition and keeps a check on those who rule. Today, in the US, the administration is a Democratic one and not a hybrid between Democrats and Republicans. Similarly, in the UK, the government is a Conservative one headed by Boris Johnson, while the Labour Party is in opposition. The party that wins an election puts together a comprehensive political, economic and security strategy for the country and is held responsible for its success or failure.
One might say that, in the US, the people directly elect the head of state, while in Lebanon the parliament elects the president. Others might say that, unlike the US and UK, where there are dual-party systems and where the political scenes are divided between the liberal left and conservative right, Lebanon is a country where the political configuration is divided along sectarian lines.
Still, in the elections they are standing as blocks. For example, Hezbollah, Amal and the Free Patriotic Movement formed one block in the parliamentary elections. They represent the so-called resistance block. In the case of Lebanon, parties of similar thinking should form a coalition, with the coalition that has the majority of seats in parliament forming a government to put together a comprehensive plan and be held accountable for its execution and success. However, the leaders of the political class do not want any accountability. They know that, despite their differences on policy issues, they are “brothers” in corruption. They want to stay together and keep the status quo.
Today, Lebanon is collapsing and is in dire need of an International Monetary Fund bailout package. The Najib Mikati government, which is a unity government that took office from September 2021 to May 2022 and is now in caretaker status, was not able to seal a deal with the IMF. This was also the case of the government of Hassan Diab, which was in power from January 2020 until August 2021, when its members resigned en masse following the Beirut blast and it became a caretaker government. In total, two-and-a-half years of governments and caretaker governments have been unable to reach a deal with the IMF, which Lebanon badly needs because of this consensual democracy.
The mutilated concept of unity government and mithakia are driving political paralysis. It is giving an escape route to the different political parties, allowing them to blame the situation on others. The solution is to have one block form a government, put a comprehensive plan in place and be responsible in front of the Lebanese people and the international community.(Courtesy Arab News)