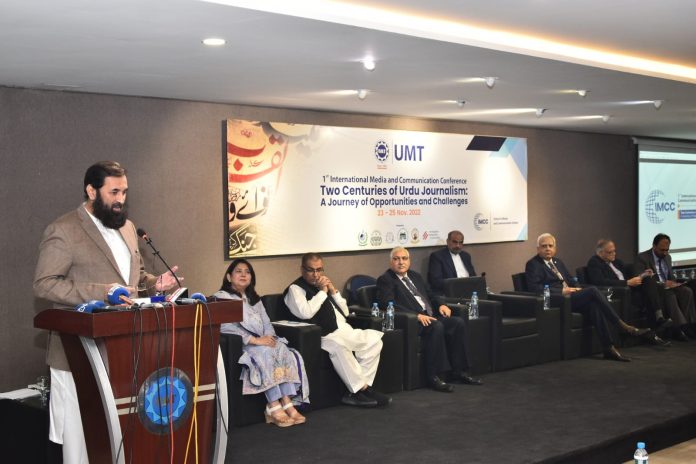 Lahore (General Reporter) The first three-day international media and communication conference was organized by the School of Media and Communication Studies of the University of Management and Technology (UMT) in which Gurnoor Punjab Muhammad Balighur Rahman participated as the chief guest. DGUMT Abid Sherwani, Rector UMT Dr. Asif Raza, Dean School of Media and Communication Studies Prof. Dr. Anjum Zia, Chairman Punjab Higher Education Commission Prof. Dr. Shahid Munir, Senior Journalist Mujibur Rahman Shami, Salim Bukhari, Salman Ghani, Dr. Altafullah, former Senator Javed Jabbar and a large number of faculty, staff and students participated in the conference. More than 100 research journals on Urdu journalism were also presented in the conference, in which the solutions to the problems related to Urdu journalism were presented. It was highlighted how the importance of Urdu journalism can be promoted. Dean School of Media and Communication Studies Dr. Prof. Dr. Anjum Zia in his opening remarks thanked the Governor of Punjab Muhammad Balighur Rahman and other guests for participating in the conference. paid He said that the purpose of this conference is to shed light on Urdu journalism and its history so as to highlight the importance of Urdu journalism. Media School is training its students on modern lines. The conference is also a link in this series.
Punjab Governor Muhammad Balighur Rahman while addressing the conference congratulated the UMT administration for organizing this successful conference. He said that the history of Urdu journalism is very old and Urdu has a place in the whole world. The Governor of Punjab said that the purpose of universities is to conduct research because nations are on the path of development only through research.
He further said that Urdu language and journalism have played a very important role in the history of the subcontinent. Governor Punjab said that in the history of the subcontinent, journalists have always made sacrifices and I am deeply saddened by the recent death of Arshad Sharif. At the end of the speech, Muhammad Balighur Rahman said that moral training of the new generation is very important so that the justice system can prevail in the society. Rector UMT Dr. Asif Raza congratulated Dean Media School Professor Dr. Anjum Zia for organizing the successful conference. Presented He said that our problems, our direction and our thinking will be fixed by correcting it. He said that without Urdu journalism, we have no livelihood, so our young generation has to carry forward this mission. He said that UMT is one of the best universities in Pakistan and will soon be among the best universities in the world because now we are competing with the best universities in the world. DG UMT Abid Sherwani expressed his views. He said that this is the first international conference of its kind to be held on Urdu journalism. Along with providing quality education to its students, UMT also provides successful and useful platforms like this conference to groom them. DGUMT said that young media students should learn objective and responsible journalism from their teachers.
Senior journalist Salman Ghani, while expressing his views, congratulated UMT for holding a successful conference and said that a great person like Dr. Hassan Soheib Murad Shaheed has made a successful institution like UMT which is truly a place for the promotion of education. It is playing a very important role in shaping the morals and character of the young students. The important role of Urdu journalism in the freedom of Pakistan can never be forgotten.
Senior Journalist Mujibur Rahman Shami also congratulated the UMT administration and media department for organizing the first international conference on Urdu Journalism in Pakistan in his keynote address. He said that Urdu newspapers have fought battles for freedom. He said that Urdu journalism has trained people from generation to generation and we have to strengthen the importance and role of Urdu journalism. Ex-Senator Javed Jabbar, highlighting the importance of Urdu language and Urdu journalism, said that there is no example of the way journalists have endured hardships and difficulties. We have to protect our values ​​with this development. In the conference, international journalists spoke through zoom and highlighted the role and importance of journalism and said that journalism plays an important role in developing the society of any country. At the end of the ceremony, DGUMT Abid Sherwani along with Rector UMT Dr. Asif Raza and Prof. Dr. Anjum Zia also presented a souvenir to Punjab Governor Muhammad Balighur Rahman.