The rule of law (Sabar Chugtai) 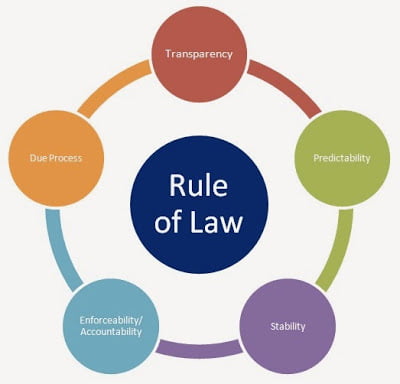 The rule of law
It is a fact that only those countries are developing in the world where the institutions are playing their role within the framework laid down in the constitution and law. If you experiment with the systems of the United States, the United Kingdom, France, and many other countries, you will come to the conclusion that the civil-military institutions in these countries do not go beyond their purview. The question is that we also have a democratic system of government, but why have we failed to adopt democratic principles to this day? Why is it difficult for us to play a role within the ambit of consultation and constitutional law? In other words, why are institutions in Pakistan trying to outdo each other? And what will be the result of these efforts. Addressing the Senate yesterday, Ameer of Jamaat-e-Islami Sirajul Haq said that rule of law and constitution should be established in the country instead of rule of families and individuals. This statement reflects the thinking of every conscious person in Pakistan. Here families and individuals have been seen to be strong but the constitution and law have been weakened. Here the powerful do not come under the purview of any law and constitution but all the legal requirements are met on the poor and the oppressed. And the whole nation is suffering the consequences today. The country is suffering from one crisis after another. Every field from agriculture to industry is in decline and it is not even possible to talk about the economy. The whole country has been mortgaged to the IMF. Otherwise, our own arm, Bangladesh. According to a recent report, Bangladesh’s per capita income will exceed India’s per capita income in a very short period of time. This means that Bangladesh’s GDP It is moving very fast. That even India, which is now considered the center of the world market, is going to be left behind. We have a moment to think about where we stand. Here the institutions are intertwined with each other while a strange tug-of-war between the political wrestlers and the institutions is going on which is at its peak nowadays. If only we had learned to play our part in the constitution and law in seventy five years, then our country would not have this situation. Institutions would have progressed instead of declining. We have seen a strange power struggle in our country that many rulers have been targeted in the past. Zulfiqar Ali Bhutto, Muhammad Khan Junejo and many others fell victim to the same tug of war. Every political leader enjoyed power by riding on the shoulders of a certain power instead of the constitution and law, but one day that power ended. The voices of the elected are still being heard in the country, not of the elected. Whether in the National Assembly or the Senate, they hear both slogans echoing. On the one hand, allegations are made, on the other hand, there is an immediate reaction and a term is used which has not been heard or seen till date. Every statement of a political wrestler demands attention but immature minded politicians rarely think about the constitution and law while issuing a statement. Its practical demonstration can be seen in Pakistan nowadays. How long will this series continue? The world is developing in every field. We are falling in every field. When will personalities and institutions in the country play their role within the ambit of the constitution and law and who will teach us all this? For this, it is necessary that we put the country and the nation first and work for their development instead of putting our own interests first. The rule of law and constitution is essential in the country and it is necessary to strive for it. Siraj-ul-Haq has pointed in the right direction which needs to be understood and followed۔