Time to announce revolt against this system, Siraj Ul Haq 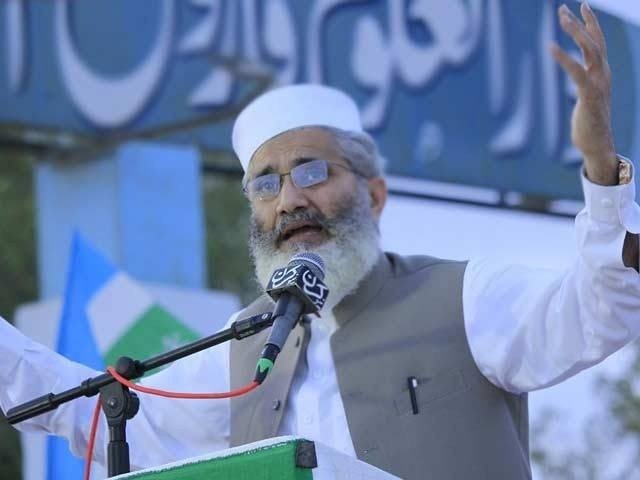 LAHORE: Amir of Jamaat-e-Islami Sirajul Haq has said that it is time to raise the banner of revolt against the elites who run the country like the Mughal Empire.

Addressing a public gathering at Company Bagh in Sargodha, Siraj-ul-Haq said that the occupying elites had betrayed the ideology of Pakistan and the leaders of Tehreek-e-Pakistan and had been exploiting the people for the last seven decades. To revolt against the system, the people must stand up for their rights.

He said that the people should know that their vote is the destiny of the country, the solution of Pakistan’s problems lies in the establishment of a sustainable Islamic democratic society, the people must support the struggle of Jamaat-e-Islami to achieve this goal.
Amir Jamaat-e-Islami said that the government and the opposition are fighting for their interests while the people are going through mental anguish. He said that the decision to stay away from the politics of PTI and PDM was taken because the people’s Welfare is not included.

He said that in the battle between the rulers, the people have recovered, inflation has spiraled out of control, millions of educated people are wandering around with degrees in search of employment, the value of Pakistani currency in all neighboring countries. The interest rate system has crippled the economy, the country is mired in debt, health, education, agriculture, industry are all on the brink of collapse but the Prime Minister is not aware of all these facts.

Siraj-ul-Haq said that the poor are talking about flour, sugar and petrol but the Prime Minister has made it a point to give NR to someone. The rulers themselves are in power because of NRO. The people have been deceived in the name of building universities in the governor’s houses, revolutionizing the health and education sectors. The government is incompetent and has no mechanism to solve the problems.

He said that the time has come to raise awareness against the elites who are running the country like the Mughal Empire, Jamaat-e-Islami is the only option and the problems of the people can be solved only through the implementation of Quran and Sunnah system through democratic struggle can.