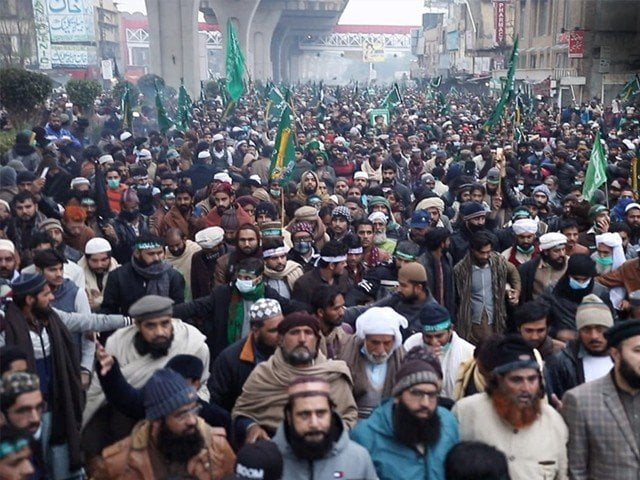 Protests of Tehreek-e-Labaik Pakistan in different cities of the country including Karachi, Lahore, Islamabad and Rawalpindi are continuing for the second day.

Many major highways are closed due to the protests and citizens are facing severe distress. Several vehicles and ambulances are also stuck in the rush. Clashes also broke out between protesters and police in several places, injuring several policemen and TLP workers. Police have arrested more than 100 demonstrators.

The federal government has deployed Rangers in Islamabad. The mob set fire to police vehicles and damaged civilian vehicles and motorcycles.

In Ferozwala, protesters hurled stones at Rangers and police, killing a police constable. Is identified as Muhammad Afzal.

Tehreek-e-Lubaik Pakistan workers are protesting against the arrest of their central leader Allama Saad Rizvi.

Tehreek-e-Labeek-e-Pakistan (TLP) had announced a march on April 20 on the deportation of the French ambassador and boycott of French products.

TLP chief Saad Hussain Rizvi had said that the government had signed an agreement with Allama Khadim Hussain Rizvi on November 16, 2020, which required a complete boycott of French products within three months, but for the completion of the agreement. Further deadline was extended to April 20. The deadline for the agreement was announced by the Prime Minister of Pakistan himself in the media. Now, if the French ambassador does not come out by April 20, there will be an honor march.

On the other hand, the government is preparing to present the agreement reached with Tehreek-e-Libek in the form of a resolution in the Assembly. A few days ago, Prime Minister Imran Khan in a meeting with Federal Minister for Religious Affairs Pir Noorul Haq Qadri and other ministers directed that the French Ambassador The agreement reached by the Libek movement on deportation and boycott of products should be presented to the Assembly in the form of a resolution.