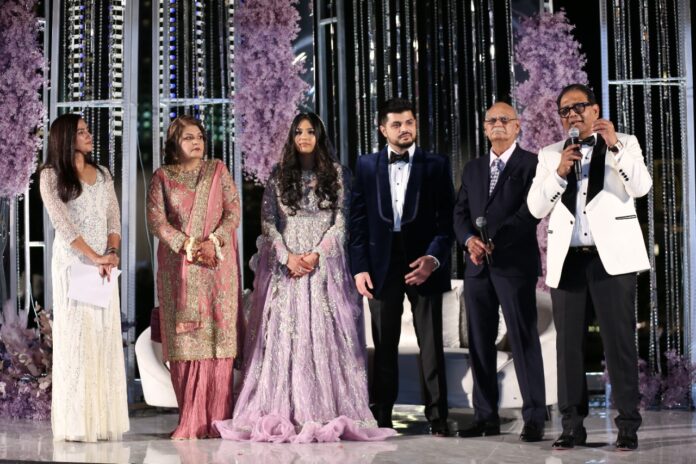 Dubai witnessed the most glamorous wedding engagement of the year at the luxurious Armani hotel on Jan 20th 2022. The theme of the evening was an enchanted forest and left the guests awestruck with the exquisite décor. It beautifully underscored the captivating romantic ambience of the occasion.

Princess Sania Mulk who hails from the Royal family of Nawabs of Kurnool, Andhra Pradesh, India, was betrothed to US based Bilal Khalid Ahmed in a heartwarming ceremony attended by several high profile dignitaries and celebrities from the world of sport and cinema.

Princess Sania is the daughter of the well-known industrialist Nawab Shaji Ul Mulk & the late Farha Mariyum Khatoon. It may be recalled that the family’s forefather, the late Nawab Gulam Rasool Khan Panni was the last ruler of Kurnool and was amongst the freedom fighters that fought the British army as an ally of Tippu Sultan. Late Nawab Alaf Khan and late Nawab Anis Ul Mulk are the paternal and maternal grandfathers of the bride.

With a degree in architecture earned from the prestigious Virginia Tech Sania is now launching her career at HKS, arguably one of the best architectural firms in the world, headquartered in Dallas, Texas.

Son of Mr. & Mrs. Khalid and Ghazala Ahmed who are settled in the United States along with their 4 sons and daughter, Bilal has completed his Bachelors of Material Science degree with a specialization in Nuclear Engineering from Virginia Tech. He is currently with the US Department of State, helping design systems for the US Embassies & Consulates around the world.

Nawab Shaji Ul Mulk, whose dedication and hard work have been instrumental in creating an impressive business empire across different portfolios and disciplines including the now globally famous T10 cricket tourney is now playing the role he loves best: that of a proud and doting father.