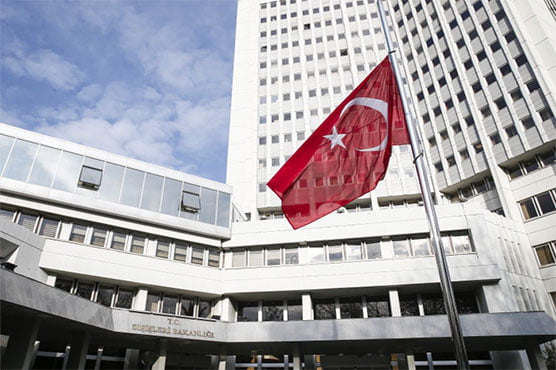 ISTANBUL (AFP) – Turkey on Thursday told foreign countries to keep out of its domestic affairs after Western powers uniformly condemned its bid to shut down the main pro-Kurdish party.

The top public prosecutor in Ankara on Wednesday demanded that the leftist opposition Peoples  Democratic Party (HDP) be dissolved over its alleged links to outlawed Kurdish militants.

The 609-page indictment put before the Constitutional Court accuses the HDP of being a threat to the “indivisible integrity of the state” and seeks to ban more than 600 party members from engaging in politics for five years.

The US State Department said the ban would “further undermine” democracy in Turkey and the European Union said it was “deeply concerned” since the party s closure “would violate the rights of millions of voters in Turkey”.

“Criminal proceedings against numerous MPs and members of the HDP are all part of a development that calls into question the rule of law in Turkey,” a German foreign ministry spokesman added in Berlin.

Council of Europe Secretary General Marija Pejcinovic Buric told German newspaper Die Welt that banning a political party “is an extreme measure that may only be justified as an instrument of last resort in very exceptional circumstances in a democratic society.”

The Turkish foreign ministry responded by saying that comments from “some countries” it did not name “were incompatible with the principle of the rule of law”.

“We invite those… who dare to meddle in our domestic affairs to respect the judicial process led by independent courts,” it said.

Turkey is under fire from Western governments over the independence of its judiciary.

Critics accuse Erdogan of stacking the courts with supporters and using them to muzzle opponents since surviving a failed coup attempt in 2016.

The HDP in particular has been on the radar of Turkish officials over its alleged links to the outlawed Kurdistan Workers  Party (PKK).

The PKK has been waging an insurgency since 1984 that has killed tens of thousands and is listed as a terrorist organisation by Ankara and its Western allies.

The HDP has seen dozens of its mayors dismissed over alleged terror links.

The party s former co-chair Selahattin Demirtas — a two-time rival to Erdogan in presidential elections — has been kept in detention since 2016 despite calls from European Court of Human Rights demanding his release.

Around 100 protesters gathered in Istanbul on Thursday against the HDP s closure threat.

“We must show our opposition in a massive way,” said Baki Gokce, one of the protesters. “Because the more we stay silent the more new attacks will happen.”

The chief public prosecutor alleges in his indictment that the HDP is “organically” linked to the PKK.

Erdogan s press aide Fahrettin Altun tweeted on Wednesday that “it is an indisputable fact that HDP has organic ties to PKK”.

The post featured a news article urging the government to take a step toward peace with the PKK.