Turkey to push ahead with plans for Cyprus despite protests 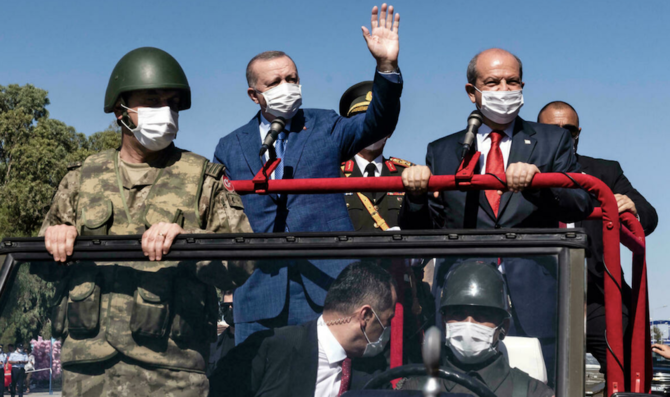 Turkish President Recep Tayyip Erdogan was in northern Cyprus last week for a two-day visit to mark the 47th anniversary of the landing of Turkish forces during the 1974 war. Days before the visit, he said that he would be announcing “good news” while there, so all eyes were fixed on his trip.

Addressing the north’s parliament, Erdogan called for a two-state solution on Cyprus. Currently, the northern part of the island is recognized as a sovereign state only by Ankara, while the southern, Greek part is an internationally recognized state and a member of the EU. The two sides have differing views on how to resolve the issue, as the Greek Cypriots back a federal system as outlined in UN resolutions, while Turkish Cypriots, under the leadership of pro-Ankara leader Ersin Tatar, want a separate state.

“We don’t have another 50 years to waste,” Erdogan said, referring to decades of failed UN-led efforts to reunite the two sides. Moreover, he voiced support for the north’s plans to reopen part of Varosha, a coastal resort town that has been abandoned since 1974. “The doors of a new period that will benefit everyone will open in Varosha,” Erdogan said in remarks similar to those made by Tatar, who said that an initial 3.5 percent of the town would be “removed from its military status.”

The international reaction to the Turkish statements came immediately. The Greek Cypriot administration said Turkey’s proposal for a two-state solution is a clear violation of UN resolutions on the divided island and will never be accepted. Meanwhile, hot on the heels of Erdogan’s visit, Greek Foreign Minister Nikos Dendias on Wednesday visited the Greek Cypriot administration.

Erdogan’s remark that Turkey “will not wait another 50 years” was also a clear signal to the EU and the US. Both Brussels and Washington reacted harshly to the Turkish president’s proposal, while France even accused Ankara of a provocation.

All proposals to unite the island have so far been in vain, which encourages the Turkish side to take the matter into its own hands.

However, all these protests seem set to fall on deaf ears, as Ankara is determined to go ahead with its plans for the island. During his visit, Erdogan also announced that Turkey would help construct a presidential palace and a new parliament building in the north, adding that construction would begin soon.

Prior to Erdogan’s visit, there were several reports claiming that Azerbaijan might soon establish a diplomatic mission in the north or become the second state after Turkey to recognize the northern administration. There were also media reports stating that Pakistan might follow the path of recognition. A tweet posted by the Embassy of Pakistan in Ankara, which stated that the consular team was scheduled to pay a three-day visit to northern Cyprus, sparked speculation about the prospects of Islamabad officially recognizing the northern part of the island.

There have also been reports that a total of five countries are planning to recognize the north: Azerbaijan, Pakistan, Libya, Bangladesh and Gambia.

Although Turkey is currently the only country to recognize northern Cyprus, the latter has representative offices in several countries, including the UK and US. It is also an observer member of the Organization of Islamic Cooperation and of the Economic Cooperation Organization.

All proposals to unite the island have so far been in vain, which encourages the Turkish side to take the matter into its own hands.

Although the issue of Cyprus has been on the international agenda for decades, the matter of recognition of the north is more high profile than ever before. Thus, the timing of the reports about the prospect of more countries recognizing it is more significant than the news itself. Ankara, which is unhappy with the status quo, is driven by both domestic and economic concerns and is likely to speed up its efforts. (Courtesy Arab News)