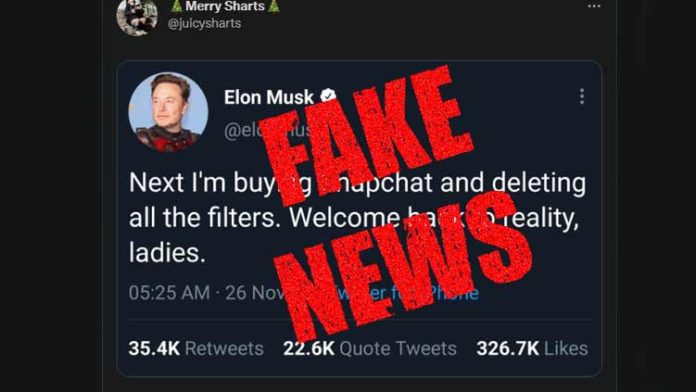 (Reuters) – Social media users have been sharing a fabricated image that appears to show a Twitter message from billionaire Elon Musk saying that he will buy Snapchat.

Screenshots of the fake tweet circulating on social media appear to show Musk’s verified account on Nov. 26 stating, “Next I’m buying Snapchat and deleting all the filters. Welcome back to reality, ladies.”

The earliest version of this fake screenshot Reuters could find was attached to a Nov. 28 Twitter post from user @juicysharts, which had received over 23,000 likes and nearly 3,000 retweets at the time of writing (here). The user’s bio includes the description “meme rapscallion,” suggesting it is a satirical account.

While some responses to the post question if the screenshot is real, others appear to take it at face value, with comments such as, “it’s a good way to attract the recalcitrant of social networks,… buy twatter, build new fone, buy snapchat, and else coming up.. Sorry but more and more I really don’t trust this guy…” here

The screenshot has also been shared by Facebook users (here)

An advanced search of Musk’s Twitter feed showed no evidence that he had posted any such remark (here)).

A Google news search also showed no reports of Musk saying he would buy Snapchat (here).

Satire. A screenshot of a tweet by Elon Musk saying he will buy Snapchat “next” is fabricated. Musk did not tweet that he would buy Snapchat.