Ukraine must remain independent and sovereign 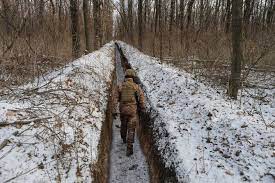 Over the past few weeks, Russia has been conducting a large-scale military buildup along its border with Ukraine and in occupied Crimea. Most of these Russian deployments seem to be spontaneous and unrelated to any scheduled training exercises.
Dozens of videos in social media posts show hundreds of Russian tanks and armored vehicles pouring into the region. These troop movements have coincided with an increase in fighting in eastern Ukraine. So far this year, 24 Ukrainian soldiers have been killed and almost 60 wounded while fighting against Russian and Russian-backed forces.
The current crisis in Ukraine stems from 2013, when Kremlin-backed Ukrainian President Viktor Yanukovych failed to sign an Association Agreement with the EU. Months of street demonstrations led to his overthrow in early 2014. Russia responded by illegally annexing Crimea and stoking a separatist conflict in eastern Ukraine.
Since then, almost 5 percent of Ukraine’s landmass and more than half of its coastline have been under illegal Russian occupation in Crimea. In eastern Ukraine, Russia and Russian-backed separatists continue to propagate a war that has resulted in more than 13,000 lives lost and 30,000 people wounded; inflicted heavy damage on the Ukrainian economy; and slowed Ukraine’s progress toward deepening ties with the transatlantic community. Russia has also launched sophisticated cyber attacks against Ukraine’s infrastructure.
For Ukraine, the stakes are high. The country is desperately trying to reform its economy and governance structures, all while dealing with a global pandemic and defending against the Russian aggression. It is in the midst of a national struggle that will determine its future geopolitical orientation: The West or Moscow. The outcome of this struggle will also have long-term implications for the transatlantic community and the notion of national sovereignty.
Russia’s immediate plan is unclear but one thing is certain: The Biden administration is being tested. For Moscow, the long-term strategic goal, at a minimum, is ensuring that Ukraine remains out of the transatlantic community and distanced from organizations such as NATO and the EU. Russia would prefer the eventual integration of Ukraine into Moscow-backed groups such as the Collective Security Treaty Organization or the Eurasian Economic Union. However, this seems unlikely to happen any time soon.
The most effective way for Russia to keep Ukraine out of organizations such as the EU or NATO is by ensuring the conflict in eastern Ukraine remains “frozen.” This means that while major fighting stops, localized fighting continues without a conclusive end to the conflict. This is what Ukraine is currently experiencing and explains why Russia has made no meaningful effort to bring about a peaceful resolution to the conflict.
Given the right circumstances, such as a lack of US and European resolve, another plausible scenario is that Moscow helps the separatists consolidate gains in Donetsk and Luhansk to create a political entity that functions more like a viable state. This would include the capture of important communication and transit nodes, such as the city of Mariupol and its port, and the Luhansk power plant, all of which are under Ukrainian government control. While this could be done in a piecemeal manner, such a move would also require the complete abandonment of any notion of a ceasefire.
The most aggressive scenario could involve an attempt by Moscow to reestablish control of the Novorossiya region, of imperial times, in southern Ukraine. This would create a land bridge between Russia and Crimea, eventually linking up with Russian-occupied Transnistria in Moldova. This scenario would require that Russia takes over Mariupol and Odessa, Ukraine’s 10th-largest and third-largest cities, respectively, as well as a large-scale and public mobilization of the Russian armed forces.
Such a course of action by Russia would fundamentally change the geopolitical and security landscape in Eastern Europe in a way not seen since the Second World War.

Modern Ukraine represents the idea in Europe that each country has the sovereign ability to determine its own path, to decide with whom it has relations, and how and by whom it is governed.

This scenario would also be very risky for Moscow. The Ukrainian military is far more capable, well-trained and equipped than it was in 2014, and local resistance would strengthen as Russian troops and their proxies move west, especially across the Dnieper River. Therefore an aggressive scenario would prove to be very costly, making it unlikely that Russia will undertake it. However, nothing should be ruled out when it comes to Vladimir Putin.
Modern Ukraine represents the idea in Europe that each country has the sovereign ability to determine its own path, to decide with whom it has relations, and how and by whom it is governed. No outside actor (in this case Russia) should have a veto on a nation’s membership or closer relations with organizations such as NATO.
It is in the international community’s interest that Ukraine remains independent and sovereign, and maintains the ability to decide its own destiny without outside interference.
It remains to be seen whether a larger Russian invasion of Ukraine is imminent, but policymakers cannot rule it out. If the Russian invasion of Georgia in 2008, its invasion of Ukraine in 2014, and its military intervention in Syria in 2015 are any indication, clearly Moscow will use military force to advance its national interests. Watch this space. (Courtesy Arab News)