US calls for probe into deadly fire at Sanaa detention center 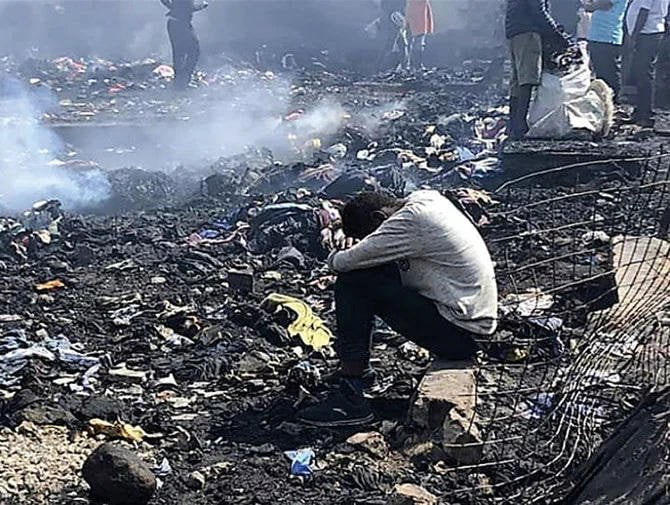 AL-MUKALLA: The US State Department on Friday called for an immediate investigation into the death of dozens of migrants inside a Houthi-run detention center in Sanaa on March 7, a day after the EU made a similar call for a probe into the incident, building international pressure on the Houthis to disclose the truth.

“We are deeply saddened by reports of deaths and injuries due to a fire at a migrant detention facility in Sanaa, which a Human Rights Watch report says was a result of the Houthis’ suppression of protest at the location,” a spokesperson from the State Department said, demanding the Iran-backed Houthis give medical teams access to the wounded migrants and protect migrants who live in areas under their control.

“It is critical that the Houthis allow assistance to reach those in need without impediment, and that there be an investigation into the causes of the fire and accountability for those responsible,” the spokesman said.

Based on interviews with several survivors, HRW said in a report released on Tuesday that the migrants were “roasted alive” inside their dirty and overcrowded center after the Houthis threw explosive devices from the roof in a bid to suppress a protest.

On Thursday, the EU mission heads in Yemen joined dozens of western envoys and local and international rights groups who blamed the Houthis for starting the fatal fire and called for an independent investigation to bring the perpetrators to justice.

“The EU Heads of Mission call for an immediate external, independent investigation into the incident, and for accountability and redress to the victims and their families,” the EU delegation and the diplomatic missions of the EU states to Yemen said in a joint statement. “The deadly outcome is linked to the appalling conditions in which migrants are being held in the center, for which the de facto authorities in Sanaa are responsible.”

The statement also called on the Houthis to close the center and to cooperate with international organizations.

The Houthis said the fire, which killed 44 migrants and wounded 193 more, was accidental and pledged to open an investigation into the incident.

Fierce fighting between the Yemeni government forces and the Houthis escalated on Friday on several fronts in the central province of Marib as the Houthis dispatched hundreds of new fighters to the battlefields to make new gains, local military officials said.

Battles were reported in Helan, Al-Kasara, and Al-Makhdra, west of Marib city, where the Yemeni Army troops and their allied tribesmen, backed by massive air support from the Arab coalition warplanes, fought off relentless attacks by the Houthis.

A military official told Arab News that media reports that the Houthi made advances on the contested Helan mountain that overlooks strategic locations and the army’s major supply lines were not correct, adding that the Houthis failed to make any gains on Friday.

More than 1,000 combatants, predominantly Houthis, have been killed since early last month, when the rebels resumed a major offensive to seize control of Marib, the Yemeni government’s last bastion in the north of the country.

Sporadic clashes between army troops and the Houthis were reported on Friday in the southern province of Taiz with no confirmed gains for either side.