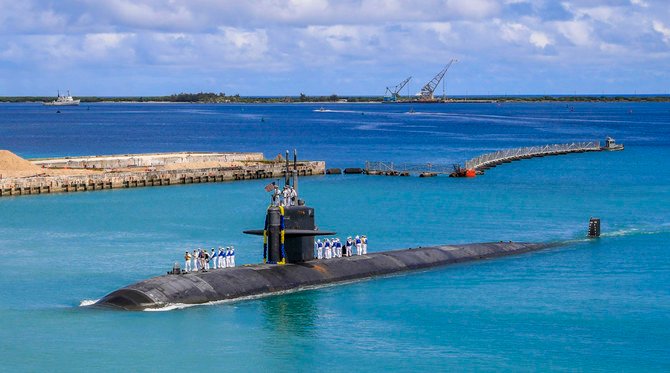 Joe Biden was supposed to be the anti-Trump on the world stage — restoring the trust of allies, enhancing multilateralism, and calming tensions through cool-headed leadership.

How did it all go so wrong?

Perhaps the US president was straitjacketed into a hasty Afghan withdrawal by his predecessor, but it was executed in a way that pulled the carpet out from under America’s allies, allowing the Taliban and their terrorist counterparts to sweep to power, destroying the lives of millions.

Now we have the awkwardly named AUKUS alliance of Australia, Britain and America, with a Pacific nuclear submarine project that risks crossing the line between constraining China and provoking China. In language we haven’t heard for decades, a Chinese state newspaper warned that the alliance potentially rendered Australia the “target of a nuclear strike.” When British Prime Minister Boris Johnson was asked by his predecessor Theresa May whether he had considered the implications of being drawn into a war with Beijing, it was clear that he hadn’t. After the self-inflicted humiliations of Brexit, he was willing to sign up to anything just to prove that the US president still remembered who he was.

In a further reminder of how Western relations have eroded over the Trump years, the French Foreign Minister described AUKUS as a “stab in the back.” It would be bitterly ironic if this deal pushed China and the EU closer together. The Australian prime minister proudly categorised seeking refuge under America’s protective umbrella as a “forever partnership.” He would be wise to review America’s history of “forever partnerships” with erstwhile allies in Kabul, the Kurds, and numerous other leaders who suddenly found themselves abandoned to face the wrath of their enemies — or indeed their own citizens.

Biden’s Afghan retreat is a continuation of an isolationist trend dominant in US policymaking for well over a decade, and for many European leaders Biden represents the culmination of Trump’s domestically obsessed instincts. Calls for a collective European defense policy, independent of the US, have intensified under Biden. In UK political circles before 2016, anything short of full-throated support for the US was unthinkable, but British politicians are now queuing up to denounce American foreign policy on live TV.

Biden says he wants to prioritize the threats emanating from China, Russia and Iran, but these are the biggest winners from America’s retreat from Central Asia

For the EU, the daydream of going it alone works better in theory than in practice. Aside from Britain’s bitter divorce, there are fundamental ideological differences, and populist authoritarians in Hungary and Poland in particular shatter this union’s unity. Spectacular failures over EU vaccine procurement bode ill for dreams of a continent-straddling army. How would 20-plus leaders ever reach a decision about going to war — except perhaps against each other? Nevertheless, such a force could prove invaluable in underpinning security and countering extremism in fragile regions such as sub-Saharan Africa.

The Trump years exposed a further truth: EU states did not respond to the implosion in US leadership by themselves stepping into the breach. Instead they too took a step back from involvement in the world – with a few exceptions, such as Emmanuel Macron’s stillborn initiative in Lebanon. In part, this was because European powers tended to become embroiled in places such as Afghanistan and Libya less out of conviction, and more because such involvement was considered essential for winning all-important US favor.

Biden says he wants to prioritize the threats emanating from China, Russia and Iran, but these are the biggest winners from America’s retreat from Central Asia. When America, for the dozenth time, demonstrates its failure to stand by its allies, which three states will be quickest to offer support to those jilted by Biden? Almost every policy decision by Trump and Biden has taken us a step closer to a looming era of Chinese supremacy by sabotaging America’s status as a world power.

Why should we care? Because the world order that the US and its allies previously underpinned was an order based on the international rule of law, democratic centrist political models, and respect for human rights — even when specific US policies undermined the values it claimed to stand for. Unrivalled Western dominance in the post-Soviet era ensured that even the most illiberal states sought to drape themselves in the trappings of democratic accountability. This is increasingly not the case in a post-Trump world overflowing with demagogues who unapologetically sabotage national constitutions, election processes and institutions.

Once, the choice was to join the civilized “community of nations” or become a North Korea-style pariah. Now, proud pariahs such as Russia, China, Iran and Turkey enthusiastically gang together to undercut the dollar-based, rules-based international system.

After his flight from Afghanistan, Biden now seeks to disentangle himself from long-standing commitments in Iraq and Syria. Yet with Iran’s proxies expanding and Daesh regaining strength, such an American pullout could make the Taliban’s triumph appear tame. While Afghanistan is defined by its remoteness, Iraq and Syria are at the strategic heart of the Middle East. Iraq and the Gulf are crucial to global energy and economic security, Syria and Turkey are gateways to Europe and the Mediterranean. America entered these states not out of benign goodwill, but from ruthless self-interest. Meanwhile, Western dithering and shortsightedness over Iran policy renders a mushrooming conflict between Tel Aviv and Tehran increasingly inevitable.

Unless America and Europe put a halt to years of policy drift and strategic retreat, in a succession of fragile states abandoned by the international community the dam will truly burst, unleashing a pandemic of chaos and conflict. Far from terrorism having been banished, Daesh, Al-Qaeda and Tehran’s proxies are now increasingly spoilt for choice over locations to take root and wage their malevolent war against the civilized world. (Courtesy Arab NEWS)