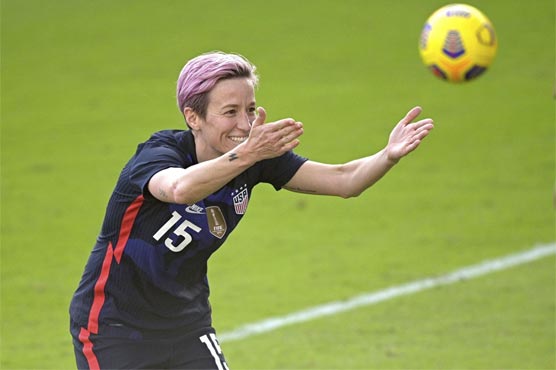 Press opened the hosts’ account in the 11th minute and Rapinoe netted the clincher in the 88th minute to lift the Americans ahead of Brazil in the four-nation tournament at Orlando, Florida.

The Americans took their 16th consecutive victory and stretched their unbeaten run to 36 games. They have not lost a match since falling to France in January 2019.

The US women, champions in three of five prior SheBelieves Cups, can complete a round-robin sweep with a Wednesday triumph over Argentina.

The Brazilians, guided by former US coach Pia Sundhage, opened by beating Argentina 4-1 to lead on goal difference before losing, close their campaign against Canada on Wednesday.

The Canadians defeated Argentina 1-0 in Sunday’s late match on a goal in the second minute of stoppage time from 73rd-minute entrant Sarah Stratigakis.

Argentina had four players ruled out for the opener due to Covid-19 safety protocols but two were reinstated to face Canada.

Press rewarded an attacking US start by taking the ball down the left wing, cutting inside and blasting a right-footed shot inside the far post for her 59th career international goal.

Brazilian goalkeeper Barbara blocked a hard shot from US midfielder Rose Lavelle in the 15th minute as the hosts kept attacking, but they couldn’t manage another first-half tally.

Press managed another chance in the opening seconds of the second half but Brazilian defenders cleared her centering kick.

Sustained US pressure produced another chance in the 61st minute for Alex Morgan but her shot was smothered.

Brazil’s Debinha managed a right-footed shot from the heart of the penalty area in the 82nd but it went wide of the far post.

A centering pass from Brazilian right wing Ludmilla brought calls for a US handball from Marta in the 83rd but no whistle came and Rapinoe scored an insurance goal off a rebound to seal the US victory.