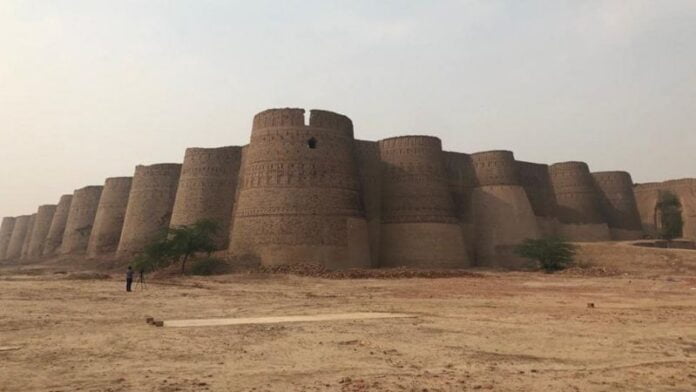 Are you searching proper adventure, pack your bag, pick your camera and come to Pakistan

Today we will visit Derawar Fort which is situated in Ahmedpur East, approximately 130 KM in South of city Bhawalpur.

This area consists of a vast desert called “Cholistan” but this area is also known as “Rohi”.  The people living in Cholistan belong to different tribes.

The people living Cholistan have to wait for long time for rain and when it showers they collect water in small trenches which are also called Toba. 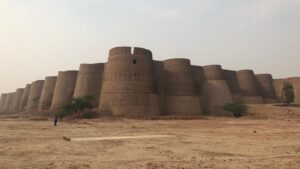 Despite the difficult lifestyle, the people here love their environment and culture very much. The civilization of this desert is very old and has a romantic culture and history.

Now we are standing just in front of historic fort in Cholistan desert. All around there is sand but what a wonderful construction it is in the center of sandy area. Look how it looks even when fort has lost its beauty, its glamour and it’s charming.

The fort is in the shape of a square with 30 meter high bulging walls. Located in the heart of the Cholistan Desert, this historic fort is impressive due to its unique structure. Which is very important and interesting for tourists. 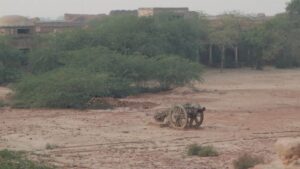 Who constructed this fort? It’s a big question, there are two claims one is that

The fort was built by Rai Jaja Bhatti in the ninth century to pay homage to Rawal Devraj Bhatti. This fort was earlier known as Dera Rawal and later as Dera Dawar but gradually the fort came to be known as Derawar.

Apart from the royal cemetery, a beautiful marble mosque welcomes every visitor. Mosque can be seen from a distance outside the fort. The beauty of the mosque is worth seeing.There are also Hindu temples at some distance. 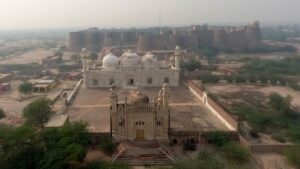 In ancient times, the river Hakara used to flow in Cholistan, which now exists in the form of a dry trail. There  are the ruins of about forty mud brick forts. Probably in the form of these forts, the Muslims had formed a line of defense to protect themselves from the bloodthirsty neighbors around them. Until half a century ago, there were traces of more than 4,000 ancient buildings that tell the story of the evolution of civilization from 4,000 BC to the beginning of the Islamic era.

Fort has forty towers. Inside is a well and a large pond near the main entrance. Both are now dry. To the east is the beautiful main gate of the fort. The tower of the fort and most of the buildings that were used as the Nawab’s troops and royal residence are still standing. The Nawab’s private residence in the Southeast Bridge is beautifully carved.

There is a  cannon  in the courtyard of the fort, which was used to shell the attackers. Nearby is a tunnel with stairs leading to it, a corridor in the tunnel, and a platform on the tunnel just beyond the stairs, through which air and light enter the tunnel. This historic fort needs to be preserved and repaired to maintain its beauty. Because now it is present in the form of skeleton.  You can see broken walls, roofs, rooms and almost all parts of the historic fort.

Not far from the fort is the mausoleum of Chanan Pir, in the shape of a large mound, different from the traditional tombs. Urs is held here for two months in February and March every year.

It’s astonishing for the people to hear that there is an important place near the fort and that is the shrines of the Companions of Holly Prophet Muhammad (SAW).. Their names are Hazrat Tayyab, Hazrat Jawar, Hazrat Tahir and Hazrat Jawad. At the same time, the period of service is also written in Bargah Rasalat which is from 6 to 21 years. Here, too, people come from far and wide. You should come here because I found a particular peace here by standing near the graves of the companions of Prophet Muhammad (SAW)

This visit will not complete until we did not talk about Cholistan Desert Jeep rally. Listen first what Nawab Usman said about this Jeep Rally.

The rally has now become a cultural festival as in addition to the rally, cultural shows and various programs are also presented here. This has increased the interest of tourists in the area and thousands of people come to see this jeep rally.

Hopefully after seeing this documentary you will decide to come to Pakistan and see all this with your eyes. But it’s a time to say goodbye now.