wherever there is a vote, the PML-N will win, Maryam Nawaz 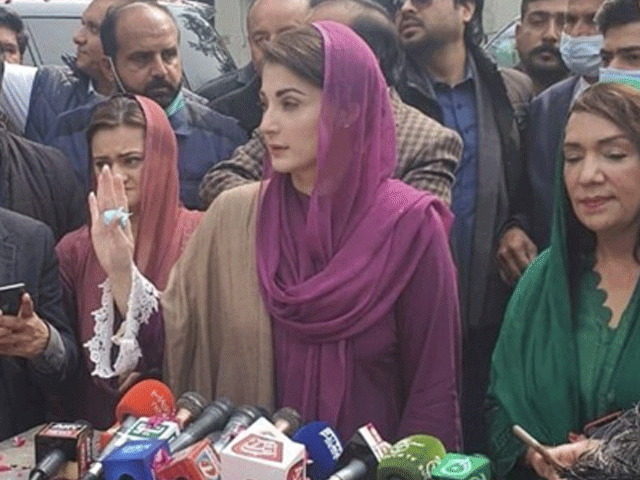 Talking to the media on the occasion of departure of Jati Umra for Daska, Maryam Nawaz said that whatever tactics the government uses will fail, wherever there is a vote, the PML-N will win. I am, we will block the way of selectors and selected, legislation and dialogue cannot be with the obedient, those who voted for change are hiding, voters did well because Imran Khan had to be exposed. His face came out in front of the people. It was very good. An incompetent person did not run a union council. He was picked and made the Prime Minister.

The whole system of justice is being thrown in to save the incompetent
Replying to a question in the Supreme Court on barring Justice Faiz from hearing the cases of the Prime Minister, Maryam Nawaz said that the words used to save Imran Khan were completely reversed when Nawaz Sharif was the Prime Minister. People are raising their voices against the K2 system, people are seeing the difference in faces, remarks and decisions, the whole system has been paralyzed to save the incompetent, the justice system to save the incompetent and incompetent, the honor of the judges is being tarnished and all tactics. It is being used, it is also difficult for the judges, some may be compelled, but it is not a good thing for the reputation of the judiciary, it is not wise to throw the entire judiciary and justice system to save one person.

Maryam Nawaz said that PDM does not support secret ballot at all, but it is they who make the video, give and take money, they are also the ones who take and give money, who are they fooling, Imran Khan is saying Yes, don’t watch the timing of the video, when the timing makes you shine, you steal the entire election of the chairman senate, now your members of the assembly are running away, now you remember the timing, not against PDM open ballot but double standards Is against and wants to expose it, horse trading is not only done with money but also calls are made not to vote for your party otherwise your file will be opened and the video will be released.

DG ISPR: Better a poor horse than no horse at all

In response to a question about not getting involved in politics, Maryam Nawaz said that DG ISPR is respected for me but such things will make fun of her in public, because one thing after another has come to light. How the Senate election was snatched, what happened to Justice Shaukat Aziz Siddiqui, Justice Qazi Faiz, what happened to Justice Malik Arshad, you speak what the world believes otherwise the reputation of you and your institution will be tarnished, you say night to day People will say that you are lying, it is better to remain silent and not talk about this issue but do not misrepresent at all.

Backdoor contacts are at the top level, DG ISPR will not know

Responding to a question about the DG ISPR denying backdoor contacts with anyone, Maryam Nawaz said that she may not be aware of it. When it comes to talking, it is at the top level. I don’t take it, but we don’t need backdoor contact, the selectors get ridiculed because of the difficulties on the people that you have brought this gift which drowned the people, they will have to answer and the people will answer ۔

Maryam Nawaz further said that a historic attempt has been made to break the PML-N but the PML-N could not break up due to being an ideological party. If anyone leaves the party, the people will be held accountable.